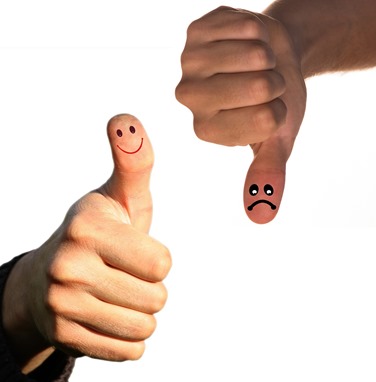 Since Mat Honan ran an experiment to Like everything he saw on Facebook for two days, I’ve been playing around with what I like, share and comment on to see if it affects the content I read.  His “campaign of conscious liking” surfaced disturbing trend in his Facebook feed which became both more to the right AND the left.

I stopped liking company pages, I stopped following people on Facebook that liked everything on their feeds willy-nilly.

Last week, I saw a post by Elan Morgan, written last August. She had made a conscious decision to stop liking posts on Facebook. This really resonated with me, so I shared the post – and noticed a change in my interactions. 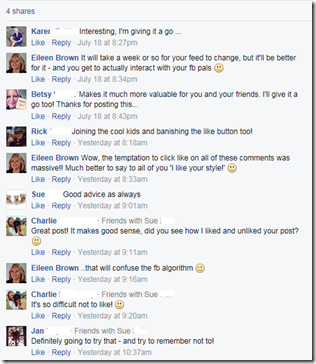 For a while, every one commented on the post, saying that they would give it a try. No one clicked like on the post at all. It was shared, but received no likes.

That is, until someone commented on the fact that there were no likes. Then a couple of connections liked the post.

It was hard to respond to the comments without blindly clicking “like”. It was a bit of a drag, going in and leaving a comment – actually engaging with others in my Facebook feed.

After a couple of days, not blindly liking everything I saw on Facebook, I noticed a change. My feed seemed cleaner. There were no posts of similar stories. The trending news no longer had sensationalist gossip stories, celebrity shockers or click-bait. The news contained credible, relevant snippets.

My feed started to show posts from Facebook friends who I didn’t interact with often. Posts from people, I’d almost forgotten about. Not liking their posts meant that they had disappeared from my feed. Now I had a good opportunity to actually comment on their posts – instead of a throwaway “like”. My engagement with my improved.

I’m not saying it was simple. Like cutting out sugar, alcohol or nicotine, it took some discipline. It was much easier to click like than to think of something to say. Every time I went onto Facebook, I had to think hard about whether I wanted to interact with that person. Or did I just want to stalk.

I’ve started sharing that post to encourage others to stop liking without thinking. Facebook will get less and less of my behavioural interactions. It will reduce the amount of irrelevant content I see as I stop liking irrelevant stuff.

I feel better already for having quality interactions with my Facebook friends. After all, that’s why I originally joined the platform – not to add my preferences to its ever expanding massive data set.